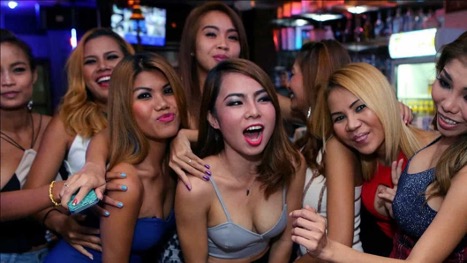 Pattaya due to years, even decades of advertising by word of mouth has found itself perceived globally as the latter-day Sodom & Gomorrah, closely followed by its big brother Bangkok. This vast sprawling seaside resort stands proudly, as one of, if not the top sex tourism destinations in the world.

Thailand’s adult entertainment industry attracts millions of visitors annually.  The  abundancy of massage parlors, blow-job establishments and escort specialist’s such as Devils Den Pattaya serviced a majority of  Caucasians from western countries, that is no longer the case. Now you will find a mixture of all nationalities, with fellow Asians bordering on being in a slight majority. White Western men are still however vying for dominance in the clubs, Gogo bars and gentleman clubs to be found throughout Pattaya at all hours of the day and night.

Prostitution itself is illegal in Thailand, however when the adult tourism businesses are generating billions annually there is no great motivation to address that illegality with any vigor. Allowing it to flourish in its many disguises. This leaves a vacuum for other equally illegal activities to flourish within the various local authorities.

Fortunately only Thai’s and some expatriates within the industry are subject to such forms of ‘taxation’ and visitors need not concern themselves with such. Most tourists avoid being directly involved with prostitution by paying what is commonly referred to as bar fines. Compensating the bar/club owners for the time their staff take off to entertain customers they have meet within those establishments. What and how the staff spend such time is no one’s business but their own and what happens between consenting adults remain their affair and is in no way illegal.

People will often speak of peak seasons, however with an estimated figure of between 10,000 / 18,000 adults working at any one time in Pattaya’s escort and sex industry.  Coupled then with warm weather for 75% year, only major global holidays such as Christmas and Songkran cause noticeable increase in the numbers of tourist and adult workers in the go-go bars of Pattaya. That estimate is somewhat conservative though if you consider the ladyboys and freelancers. The true figure is probably closer to 25,000+.

This website uses cookies to improve your experience while you navigate through the website. Out of these cookies, the cookies that are categorized as necessary are stored on your browser as they are essential for the working of basic functionalities of the website. We also use third-party cookies that help us analyze and understand how you use this website. These cookies will be stored in your browser only with your consent. You also have the option to opt-out of these cookies. But opting out of some of these cookies may have an effect on your browsing experience.
Necessary Always Enabled
Necessary cookies are absolutely essential for the website to function properly. This category only includes cookies that ensures basic functionalities and security features of the website. These cookies do not store any personal information.
Non-necessary
Any cookies that may not be particularly necessary for the website to function and is used specifically to collect user personal data via analytics, ads, other embedded contents are termed as non-necessary cookies. It is mandatory to procure user consent prior to running these cookies on your website.
SAVE & ACCEPT